The swastika (Sanskrit svastika,  “all is well”) is a cross with four arms of equal length, with the ends of each arm bent at a right angle. Sometimes dots are added between each arm.

The swastika is an ancient symbol that has been found worldwide, but it is especially common in India.  Its name comes the Sanskrit word svasti (sv = well;asti = is), meaning good fortune, luck and well-being.

The swastika is most commonly used as a charm to bring good fortune (in which case the arms are bent clockwise), but it has a variety of religious meanings as well.

The right-hand swastika is one of the 108 symbols of  the god Vishnu as well as a symbol of the sun and of the sun god Surya. The symbol imitates in the rotation of its arms the course taken daily by the sun, which appears in the Northern Hemisphere to pass from east, then south, to west. (It is also a symbol of the sun among Native Americans.)

The left-hand swastika (called a sauvastika) usually represents the terrifying goddess Kali, night and magic. However, this form of the swastika is not “evil” and it is the form most commonly used in Buddhism.

The Swastika is used in Buddhism and Jainism. In fact, the Buddhist Tibetan Swastika (anti-clockwise) (which originated from India) is known was known in ancient Tibet as a ‘yung drung’ – a graphic representation of eternity. 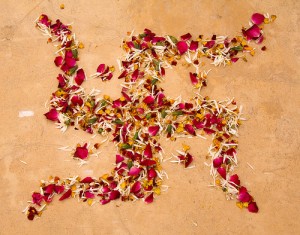 The auspicious symbol of the swastika is very commonly used in Hindu art, architecture and decoration. It can be seen on temples, houses, doorways, clothing, cars, and even cakes. It is usually a major part of the decoration for festivals and special ceremonies like weddings.

The Nazis adopted the swastika because it was understood as an Aryan symbol indicating racial purity and superiority. (The Nazis propogated a historical theory in which the early Aryans of India were white invaders.) There may also be a connection with the swastika’s magical connections, for Hitler and other Nazi leaders were keenly interested in the occult.

The Nazi party formally adopted the swastika – what they called the Hakenkreuz, the hooked cross – in 1920. This was used on the party’s flag, badge, and armband.

In Mein Kampf, Adolf Hitler wrote: “I myself, meanwhile, after innumerable attempts, had laid down a final form; a flag with a red background, a white disk, and a black swastika in the middle. After long trials I also found a definite proportion between the size of the flag and the size of the white disk, as well as the shape and thickness of the swastika.”

In fact, the Swastika is an ancient solar symbol that has been used by many cultures going back at least 3000 years. It has been found used by the celts in northern Europe and by the Greeks as early has 1000 BCE. In India the symbol has been used since Vedic times. It is most commonly seen as an ancient Aryan symbol. Nazi Germany did not invent the symbol, but only borrowed it in order to show the “aryan” roots of their new German state. Today, unfortunately, the Swastika is most commonly known for the destruction of life rather then its affirmation.

Interestingly Swastika is also a small mining town in northern Ontario, Canada, about 580 kilometres north of Toronto. Attempts by the government of Ontario to change the town’s name during World War II were rejected by residents.

So was Hitler a Hindu?

Hitler, who didn’t claim to be a Hindu, nevertheless believed in a combination of evolution and occult concepts stemming from Hinduism. Evolution conveniently provides a seemingly scientific reason to believe in the caste system of Hinduism. Hitler took this belief—that some have evolved more than others—to its ghastly, yet logical, conclusion