Disruptors are usually brought into the market places by some type of disruptive innovations. These are opportunities that can create sustainable positive disruption in capabilities, business operations, and sometimes even business models.

According to Wikipedia, the term disruptive technologies was coined by Clayton M. Christensen and introduced in his 1995 article Disruptive Technologies: Catching the Wave . A disruptive innovation is an innovation that helps create a new market and value network, and eventually goes on to disrupt an existing market and value network (over a few years or decades), displacing an earlier technology. The term is used in business and technology literature to describe innovations that improve a product or service in ways that the market does not expect, typically first by designing for a different set of consumers in the new market and later by lowering prices in the existing market.

According to Deloitte’s 2013 Trend report they are forecasting the following as the disruptors of 2013:

• Capability of CIO’s in the companies to make changes to systems into capabilities and make technical issues into business. I personaslly i like their wording ” Plan big, start small, fail fast, scale appropriately”

• The idea of social platform going beyond to transform social issues 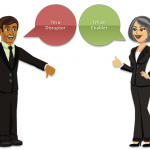 Enablers are technologies in which many companies have already invested time and effort, but which warrant another look because of new developments or opportunities. Some of the Deloitte’s enablers are:

• Combining human insight and intuition with machine number-crunching and visualization, companies can answer questions they’ve never answered before. This is within scope of the Big Data plan which they had predicted in 2012 Trend report.

• Using the concept of Gamification in workplace to motivate, service and reward behaviours. Gamification can be defined as the use of game thinking and game mechanics in a non-game context in order to engage users and solve problems

• Reinventing the ERP by revving up data, hardware, deployment and business model architectures at the core

• Be more proactive about the IT threats – and react more rapidly when breaches do occur.