These are some of the modern hindu temples built by Indian hindu expatriates. 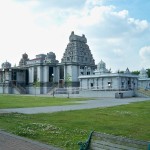 This is a very impressive temple with the main temple is fronted by two smaller temples, one dedicated to Shri Ganesha and one to Shri Murugan (Kartikaya). The The main temple has Venkateswara at the centre, and also had other deities including Lakshmi and Hanuman. Link to the website to this temple: http://www.venkateswara.org.uk/ 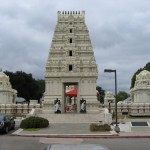 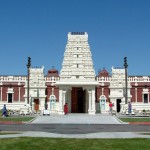 A nine- year odyssey, led to construction of the Shiva-Vishnu Temple in Livermore, CA., whose Kumbhabhishekam (Consecration) was celebrated in 1986, followed by Mahakumbhabhishekam (12th anniversary) in 1998. The Temple has been built to authentic specifications in the best of North and South Indian traditions, and is one of the few Hindu Temples in Northem California that offers comprehensive services for ritualistic worship of Hindu deities (Homas, Abhishekas, Archanas, etc). Link to the website is http://livermoretemple.org/ 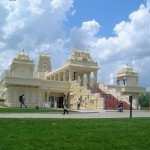 In 1985 as a result of philanthropy of nine families who donated 20 acres of land with a farm house in Aurora (a far west suburb of Chicago), as a site for the proposed Balaji temple, a beginning was made in the realization of a dream of many.
In addition to the Lord Venkateswara Swami (Balaji) shrine, there are other shrines in the temple to different deities. On either side of the main shrine are shrines for Sri Devi (Lakshmi) and Bhudevi (Andal). In the two corners in front of the main shrine are shrines for Sri Kanyaka Parameshwari and Sri Ayyappa. In the two corners further away are shrines for Sri Anjaneya and Sri Satyanarayana. Closer to the entrance are shrines to Ganapati, Subrahmanyam, Siva and Parvati. Link to the website of the temple: http://www.balaji.org/web/home.aspx 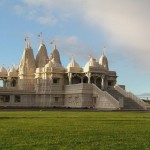 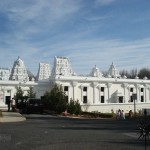 Sri Siva Vishnu Temple, the premier Hindu temple in the Washington DC Metropolitan area. The actual temple construction began in 1988 and has incorporated the Mayan, Pallava, Vijaynagara, Kerala and the South Canara styles of temple architecture. The Temple houses several deities, consecrated between the years of 1990 and 2003.Link to the website : http://www.ssvt.org/Home/index.asp 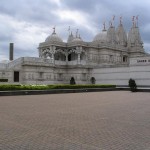 BAPS Shri Swaminarayan Mandir, London – popularly known as the Neasden Temple – is the first traditional Hindu Mandir in Europe. 2,820 tonnes of Bulgarian limestone and 2,000 tonnes of Italian Carrara marble were shipped to India, carved by over 1,500 craftsmen and reshipped to London. In all, 26,300 carved pieces were assembled like a giant jigsaw puzzle in less than 3 years.Since its opening in August 1995, the Mandir has attracted devotees and visitors from all over the world. BAPS Shri Swaminarayan Mandir – One of the 70 Wonders of the Modern World. Website link : http://www.mandir.org/index.htm 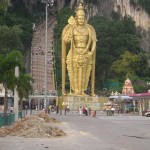 Batu cave is one of the most popular Hindu shrines outside India, dedicated to Lord Murugan. It is the focal point of Hindu festival of Thaipusam in Malaysia.Batu Caves was promoted as a place of worship by K. Thamboosamy Pillai, an Indian trader. He was inspired by the ‘vel’-shaped entrance of the main cave and was inspired to dedicate a temple to Lord Muruga within the caves.
In 1891, Pillai, who also founded the Sri Mahamariamman Temple, Kuala Lumpur, installed the murti (consecrated statue) of Sri Subramania Swamy in what is today known as the Temple Cave. Since 1892, the Thaipusam festival in the Tamil month of Thai (which falls in late January/early February) has been celebrated there. Wooden steps up to the Temple Cave were built in 1920 and have since been replaced by 272 concrete steps. Of the various cave temples that comprise the site, the largest and best known is the Temple or Cathedral Cave, so named because it houses several Hindu shrines beneath its 100 m vaulted ceiling.Link to the website : http://murugan.org/temples/batu_caves.htm 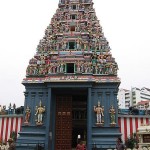 Sri Srinivasa Perumal Temple or Sri Perumal Temple is one of the oldest temples in Singapore. This large complex, dedicated to Vishnu, dates from 1855, but the 20-metres-tall Gopuram is a relatively recent addition, built in 1966 at a cost of S$300,000.It was gazetted as a national monument in 1978.Link to the website : http://www.sspt.org/index.html 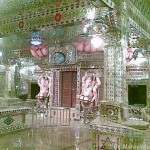 Arulmigu Sri RajaKaliamman Temple is one of the oldest temples located in the State of Johor, Malaysia. It has been in existence since 1922 on a piece of land bequeath to the Indians in Johore Bahru by the generosity of the Sultan of Johore. The temple’s growth was restricted and limited to the size of a small hut in the early years but over the years it has turn out to be one of the biggest temples in Johor Bahru.
Glass work will be the most special thing to say about the temple. The artwork looks creative and neat on each part of the temple. Each pattern and design is mostly my own and the Myanmar artisan brothers have put it together beautifully.
More than 300,000 beads of Rudraksha are pasted onto the walls in the Shiva sanctum in the Temple.