Network Attached Storage or NAS has been around for a while. Though these devices have recently got attention with the growth of cloud based platforms and virtualization. These are not clearly the $100 external hard drives that we buy from the electronic stores.

The capacity of the NAS depends on the number of internal hard drives they can manage. Network-attached storage removes the responsibility of file serving from other servers on the network. They typically provide access to files using network file sharing protocols

NAS vs. SAN
Difference between a NAS and a SAN is that a NAS appears to the client OS (operating system) as a file server (the client can map network drives to shares on that server) whereas a disk available through a SAN still appears to the client OS as a disk, visible in disk and volume management utilities (along with client’s local disks), and available to be formatted with a file system and mounted.
Despite their differences, SAN and NAS are not mutually exclusive, and may be combined as a SAN-NAS hybrid, offering both file-level protocols (NAS) and block-level protocols (SAN) from the same system.

The SAN – NAS hybrid is best utilized when you have multiple location or offices to server. This can help reduce the “travel” of data between location, reducing bandwidth usage and help increase efficiency in the ecosystem. NAS can also be used as scheduler to backup applications and information providing a better system for Disaster recovery. 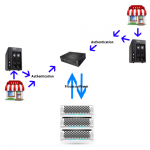