A little bit of history before talking about the Big Mac Index.

What is a Big Mac and why is it important?

The Big Mac was created by Jim Delligatti, one of Ray Kroc’s earliest franchisees, who was operating several restaurants in the Pittsburgh area. The sandwich was so popular that it was added to the menu of all U.S. restaurants in 1968. One of its most distinctive features is a middle slice of bread (“club” layer).

The Big Mac is known worldwide and is often used as a symbol of American capitalism. The Economist has used it as a reference point for comparing the cost of living in different countries — the Big Mac Index — as it is so widely available and is comparable across markets. This index is sometimes referred to as Burgernomics.

What is Big Mac Index?
The Big Mac Index is published by The Economist as an informal way of measuring the purchasing power parity (PPP) between two currencies and provides a test of the extent to which market exchange rates result in goods costing the same in different countries.

While the index has some limitations while economists widely cite the Big Mac index as a reasonable real-world measurement of purchasing power parity, the burger methodology has some limitations. In many countries, eating at international fast-food chain restaurants such as McDonald’s is relatively expensive in comparison to eating at a local restaurant, and the demand for Big Macs is not as large in countries like India as in the United States. Social status of eating at fast food restaurants like McDonald’s in a local market, what proportion of sales might be to expatriates, local taxes, levels of competition, and import duties on selected items may not be representative of the country’s economy as a whole.

According to economist a beefed-up version of the Big Mac index suggests that the Chinese yuan is now close to its fair value against the dollar. 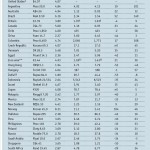 Ranking of currencies based on Big Mac Index