There has been a mixup between an MPLS connection and Secure VPN connection. During one of my recent engagements to upgrade our corporate infrastructure, I came across these terms very often and it became quiet confusing as when companies who provide sVPN connection started to brand themselves as MPLS providers; arguably because a chunk of their client information was using MPLS layer while as the rest of the information followed a secured layer.

From the structural path, we can easily differentiate an MPLS from a secure VPN but from an end user point and on basis on your companies requirement this this differentiate might mean less important. And when you sum in the cost of these two networks the differentiation in clear(er).

Multiprotocol Label Switching (MPLS) is a mechanism in high-performance telecommunications networks that directs data from one network node to the next based on short path labels rather than long network addresses, avoiding complex lookups in a routing table.

A virtual private network (VPN) is a private network that interconnects remote (and often geographically separate) networks through primarily public communication infrastructures such as the Internet. Secure VPNs use cryptography and tunneling protocols to provide confidentiality such that even if traffic is sniffed, an attacker would only see encrypted data which they cannot understand; Allowing sender authentication to prevent unauthorized users from accessing the VPN and Message integrity to detect any tampering of transmitted messages 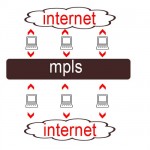 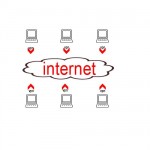