I often laugh (of course in my mind) when I hear someone says that they are helping the Third World countries, not laughing at the cause of course but at the prevalent existence of the caste system created by the developed economies when rest of the world is trying to overcome from this shadow. Let’s examine what this means:

According to dictionary.com, caste refers to in sociology as:

an endogamous and hereditary social group limited to persons of the same rank, occupation, economic position, etc., and having mores distinguishing it from other such groups.

First World: First World countries in general have very advanced economies and very high Human Development Indices. On the other hand, the United Nations defined the First World on the wealth of the nation’s Gross National Product (GNP).

Second World: The term “Second World” was a phrase used to describe the communist states within the Soviet Union’s sphere of influence or those countries that had centrally-planned economies.

Fourth World: The Fourth World refers to 1.sub-populations socially excluded from global society; 2.hunter-gatherer, nomadic, pastoral and some subsistence farming peoples living beyond the modern industrial norm. 3. 4th World can also refer to sub populations, existing in a First World country, with the living standards of those of the Third World, or developing countries.

Clearly all these worlds are not very defined and can be easily manipulated to your own judgement. To the regular citizen, these jargons simply means, first world is clearly all the rich countries and peoples within that country and this includes all of north America , I am not sure if Mexico is considered a first world!, whole of Europe, I am not sure if Easter Europe falls in this category.

The second world, I am pretty sure if unknown to a better portion of the masses

Third world refers to all the poor and over populated countries in Asia, Africa and rest of the world.

Fourth world is unknown to a greater portion of the masses, may be inexistent

Now there is a better way of defining this worlds based on economic terms which actually helps the economist and the financial gurus to segment and talk about, this is sometimes referred to as Developed, UnderDeveloped and Developing Economies. I feel this segmentation is clearer and less insulting than the theory of three worlds 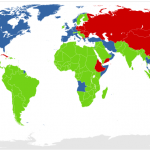