Recently I had to work on some new ideas, it was to create a system for task management, ticket creation and accountability. Though they all sound the same and nothing new to the IT field, but my job was to simplify this and make it effective for the novice. And the system i designed just proves you can do this cost effectively. 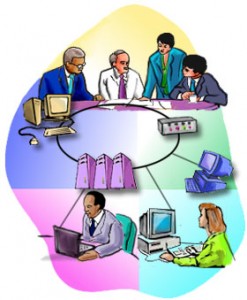 I solely support the GPL software because i owe them a lot for career development. For ticket creation, i had in mind and that was the OneorZero- Task Management and Helpdesk Solutions- http://www.oneorzero.com/ I used their free version. Though there was very limited documentation, after playing around with the settings i figured it out. The way for me was there is only user group and one task manager or admin ie me. The rest are all users. Because I dint want users to edit their original task or ticket. Because not able edit is the whole point of accountability. So the way I used was all users belongs to one user group. Doing so by creating new tickets they are all circulated to all the users and every one sees them. Very Transparent.

Third software was the yahoo widgets- Newsstand by WidgetWorld – V 1.25 – http://www.widgetworld.com/ this is a cool widget for number of reason, first its a multi feed, means you can have more than one feed showing up, which isn’t really necessary for my work but if i need to extend my possibilities i need that. second, it auto refreshes feeds every 5, 10, 15 Min’s and so on. And the cool interface to display if a new ticket has been issued and also difference in read and unread feeds…see i told you its cool..

The fourth task was to automatically update the changes into the feed, typically this task needs to be done at the oneorzero level, when a new ticket is created update the feed.xml file too. but seeing the oneorzero’s codes i dint dare to attempt to that :)) . So i went for another automation software called autoscript by autoit – http://www.autoitscript.com/ . Here i borrowed a script from one of the programmers to auto refresh a IE browser every ‘n’ minutes. So if we refresh official_demo.php which is the feed creator file, it will automatically update the XML feed file called feed.xml

Since i finalized on the programs, now i will explain briefly how they work.. oneorzero is used for ticket creation, feed creator is used for pulling those tickets from the system and create a rss feed, and autoit script to auto refresh the XML file and newsstand is used for displaying those feeds any number of system (they need to be individually installed in all PC’s).

In the newsstand give the appropriate feed link like – http://localhost/helpdesk/news/feed.xml

To refresh the IE browser so it will automatically update the xml feed file, i used the following script, which needs to be compiled using AUTOIT software..

You need to compile this in auto it software which is free to download.

Now whenever a new ticket is created by the user, it will be automatically refreshed in the feed.xml and then it will automatically displayed in the newsstand. I think this will be the future and much expanded use of RSS which is currently done primarily for news update. This could be the next EMAIL