Intranet and Internet has been around for  a while. The use of these networks are well defined and understood in the IT world. But now, formation of a new term “Outernet”. The use and meaning of this term is relatively new and defined but it is upcoming and by the look of it, this could be a game changer.

Intranet’s, during the early days of its inception were simply local networks and services which are accessed locally within a corporate network. But over the years this changed and evolved to a more advanced internal communication service which allowed easy access of IT services to its employees. As globalization picked up and employees got diverse and distributed, the need of these intranet services needed to expand. Access to intranet services were expanded to go over Internet but using secured networks such as VPN, Private Cloud etc. The intranet services are managed by a company’s IT department and are usually centralized and controlled.

Internet in its simplest form is network of internet connected computers, servers and network devices connecting public, private and government networks. Due to the nature of the network, internet is not centralized and hence cannot be controlled by a single entity.

Outernet, though new and not fully understood, the idea is to allow access to internet services to everyone by accessing information from space. The idea behind this is new and not fully active. But the group behind this idea, Media Development Investment Fund, believes that they can provide this service for free and by June 2015. The idea behind this service is transmit data around the world based on the request from the users in the ground (earth). Think this service as a Wi-Fi router which gets a request from the user which is then transmitted to a satellite in space. This will act as a big Wi-Fi router transmitting the request to other users. 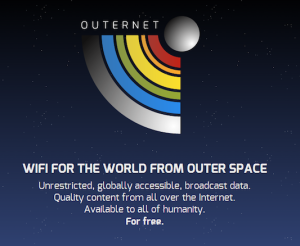